Climate in a narrow sense is usually defined as the "average weather," or more rigorously, as the statistical description in terms of the mean and variability of relevant quantities over a period of time ranging from months to thousands or millions of years. The classical period is 30 years, as defined by the World Meteorological Organization (WMO). These quantities are most often surface variables such as temperature, precipitation, and wind. Climate in a wider sense is the state, including a statistical description, of the climate system.

The climate system is the highly complex system consisting of five major components: the atmosphere, the hydrosphere, the cryosphere, the land surface and the biosphere, and the interactions between them. The climate system evolves in time under the influence of its own internal dynamics and because of external forces such as volcanic eruptions, solar variations and human-induced forces such as the changing composition of the atmosphere and land use change.

The characteristic features of the climate of Malaysia are uniform temperature, high humidity and copious rainfall. Winds are generally light. Situated in the equatorial doldrum area, it is extremely rare to have a full day with completely clear sky even during the periods of severe drought. On the other hand, it is also rare to have a stretch of a few days with completely no sunshine except during the northeast monsoon seasons.

Though the wind over the country is generally light and variable, there are, however, some uniform periodic changes in the wind flow patterns. Based on these changes, four seasons can be distinguished, namely, the northeast monsoon (Figure 1), southwest monsoon (Figure 2), and two shorter periods inter-monsoon seasons (Figure 3). 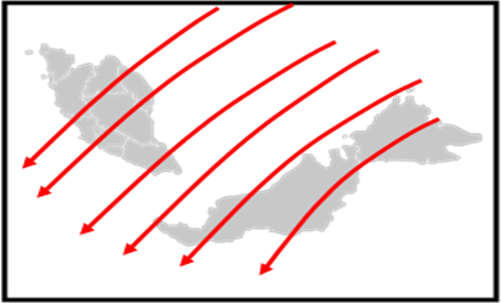 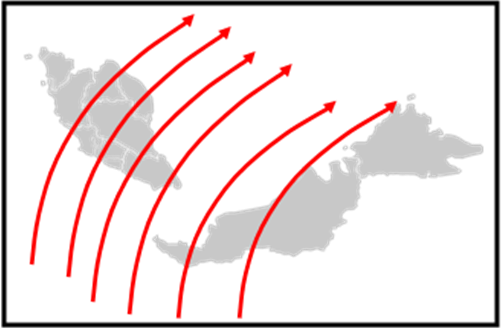 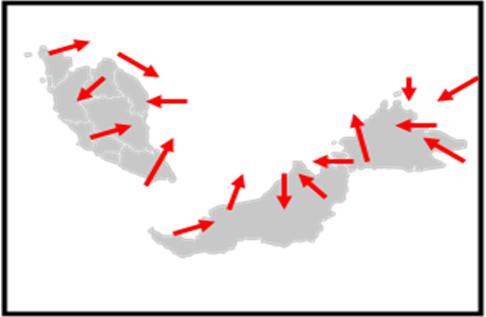 It is worth mentioning that during the months of April to November, when typhoons frequently develop over the west Pacific and move westwards across the Philippines, southwesterly winds over the northwest coast of Sabah and Sarawak region may strengthen to reach 20 knots or more.

As Malaysia is mainly a maritime country, the effect of land and sea breezes on wind flow patterns is large especially over days with clear skies. On bright sunny afternoons, sea breezes of 10 to 15 knots very often develop and reach up to several tens of kilometres inland. On clear nights, the reverse process takes place and land breezes of weaker strength can also develop over the coastal areas.

The seasonal wind flow patterns coupled with the local topographic features determine the rainfall distribution patterns over the country. During the northeast monsoon season, the exposed areas like the east coast of Peninsular Malaysia, Western Sarawak and the northeast coast of Sabah experience heavy rain spells. On the other hand, inland areas or areas which are sheltered by mountain ranges are relatively free from its influence. It is best to describe the rainfall distribution of the country according to seasons.

The seasonal variation of rainfall in Peninsular Malaysia is of three main types:

a) Over the east coast states, November, December and January are the months with maximum rainfall, while June and July are the driest months in most districts

c) The rainfall pattern over the southwest coastal area is much affected by early morning “Sumatras" from May to August with the result that the double maxima and minima pattern is no longer distinguishable. October and November are the months with maximum rainfall and February the month with the minimum rainfall. The March - April - May maximum and the June - July minimum rainfall are absent or indistinct

(d) The average monthly rainfall (annual) for Peninsular Malaysia is shown in Figure 4. 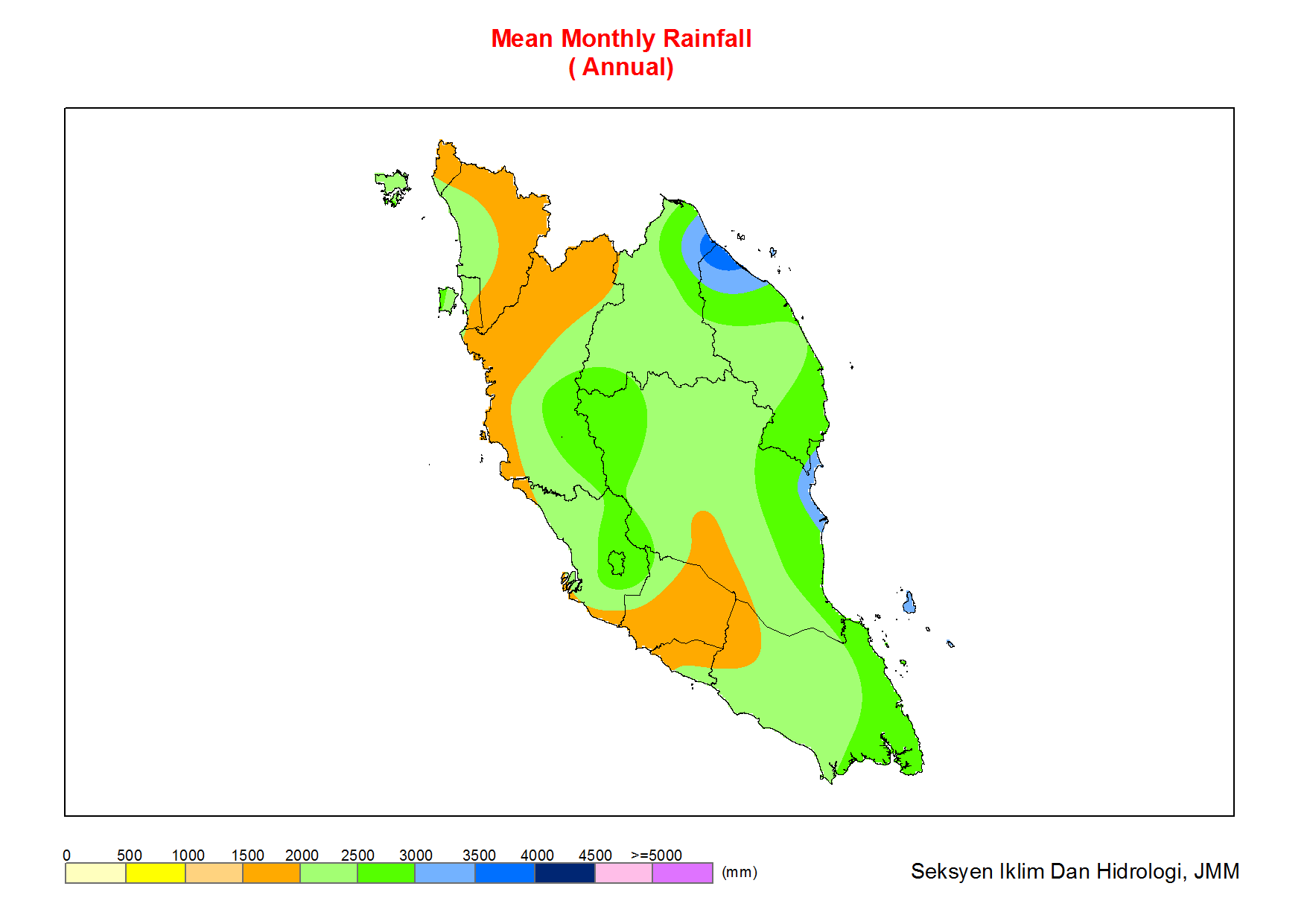 The seasonal variation of rainfall in Sabah and Sarawak can be divided into five main types:

(b) Inland areas of Sarawak generally experience quite evenly distributed annual rainfall. Nevertheless, slightly less rainfall is received during the period June to August which corresponds to the occurrence of prevailing southwesterly winds. It must be pointed out that the highest annual rainfall area in Malaysia may well be found in the hill slopes of inland Sarawak areas. Long Akah, by virtue of its location, receives a mean annual rainfall of more than 5000 mm.

(d) In the central parts of Sabah where the land is hilly and sheltered by mountain ranges, the rainfall received is relatively lower than other regions and is evenly distributed. However, two maxima and two minima can be noticed, though somewhat less distinct. In general, the two minima occur in February and August while the two maxima occur in May and October.

(e) Southern Sabah have evenly distributed rainfall. The annual rainfall total received is comparable over the central part of Sabah. The period February to April is, however slightly drier than the rest of the year.

(f) The mean monthly rainfall (annual) for Peninsular Malaysia is shown in the following. 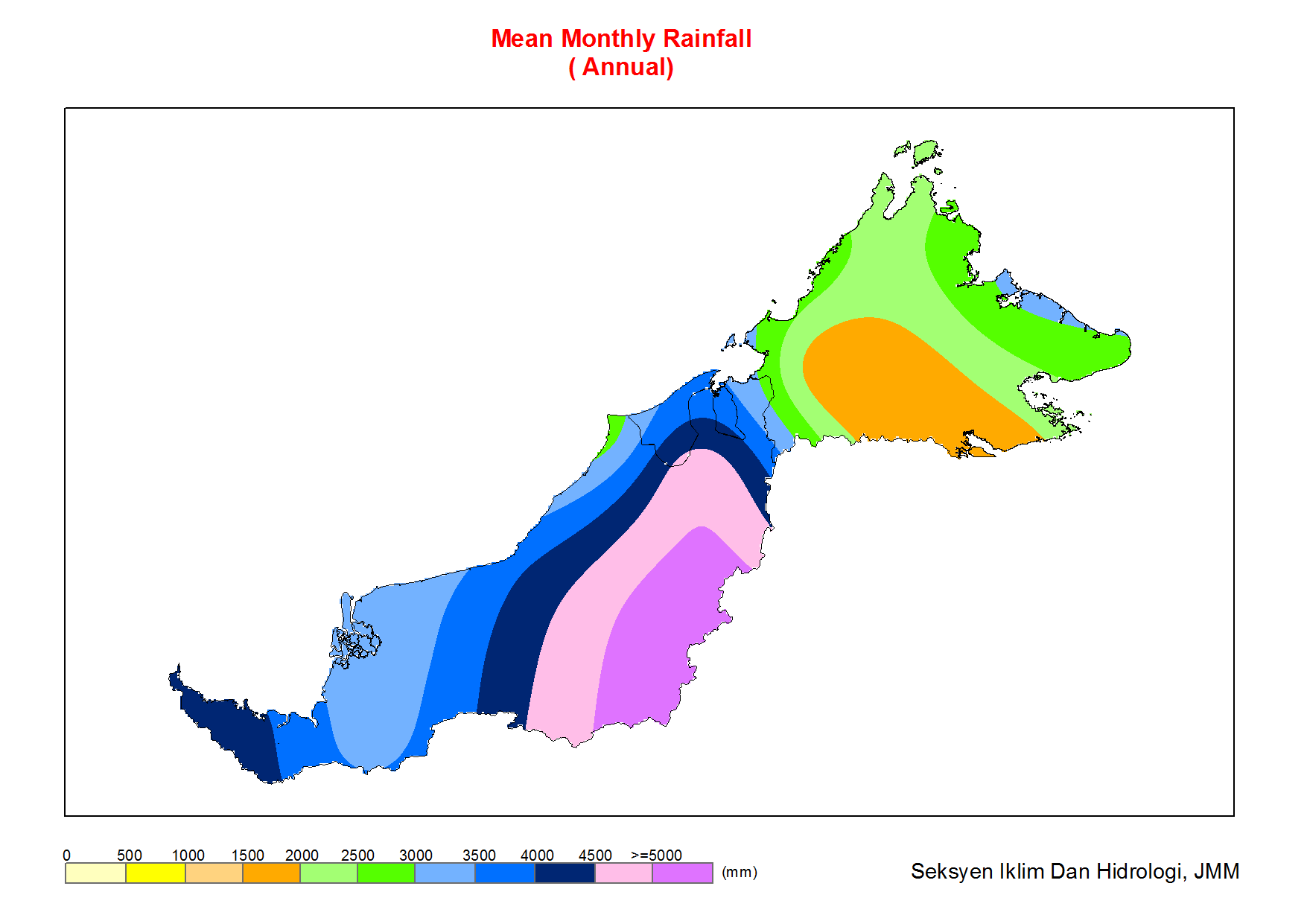 Solar radiation is closely related to the sunshine duration. Its seasonal and spatial variations are thus very much the same as in the case of sunshine.  Annual average of sunshine duration for Peninsular Malaysia and Sabah Sarawak are shown in Figure 6 and 7 respectively. 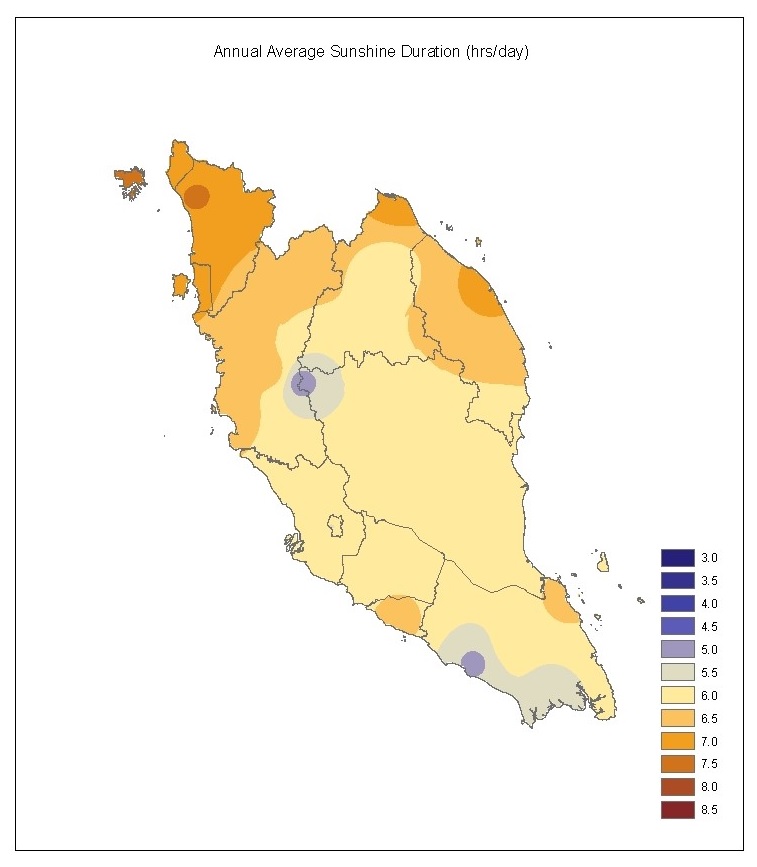 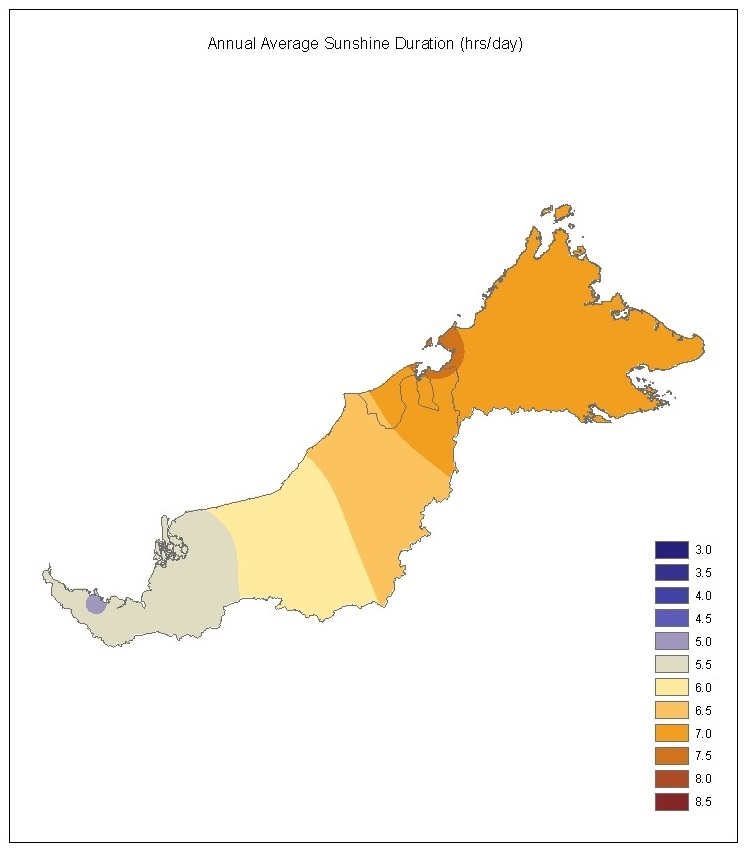 Among all the factors affecting the rate of evaporation, cloudiness and temperature are two of the most important factors in this country. These two factors are however interrelated. A cloudy day will mean less sunshine and thus less solar radiation resulting in a lower temperature.

The daily temperature range is large; from 5°C to 10°C for stations near the coast and between 8°C to 12°C for stations at the interior but the daily high temperatures such as those found in the tropical continents have never been experienced. Although the days are often hot, but the nights are reasonably cool.

The following is mean annual temperature for Peninsular Malaysia and Sabah Sarawak. 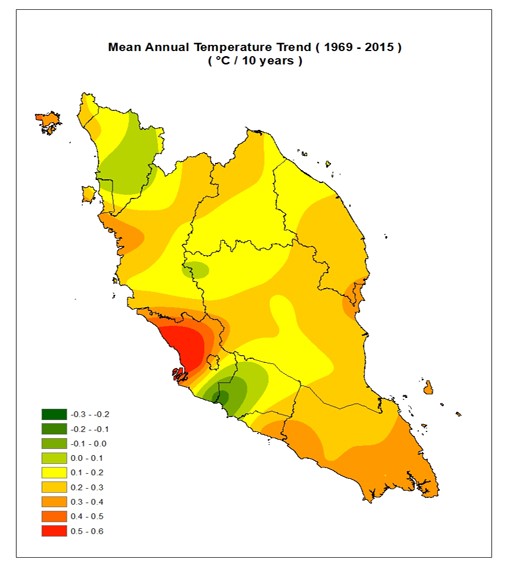 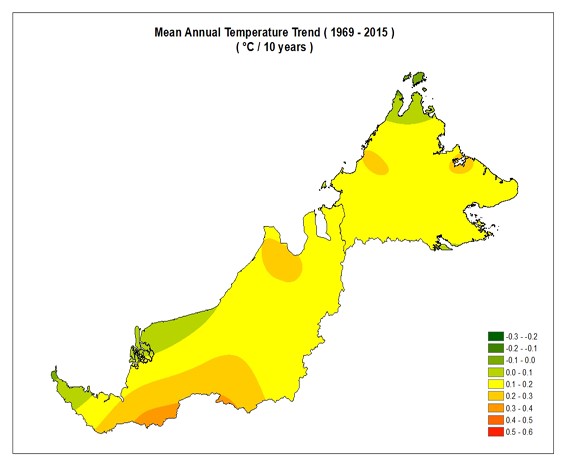 As in the case of temperature, the daily changes of relative humidity is greater than the annual changes. Average daily minimum can be as low as 42% during the dry months and as high as 70% during wet months. However, the maximum daily average was little changed from place to place, which is over 94% .It may reach as high as 100%. States in the northwest of Kedah and Perlis have the largest diurnal variation of relative humidity.