Everyone is exposed to ultraviolet (UV) radiation from the sun and other artificial sources used in industry, commerce and recreation. Emissions from the sun include light, heat and UV radiation. The sun is the strongest source of UV radiation in our environment. Small amounts of UV radiation are essential for the production of vitamin D in humans. However, over-exposure to it may lead to short and long-term adverse effects on the skin, eyes and immune system.

Ultraviolet radiation (UV) is part of the electromagnetic (light) spectrum that reaches the earth from the sun with wavelengths shorter than the visible spectrum. There are three spectral regions for incoming UV radiation. The three UV spectral regions are classified as UVA (320 - 400 nm), UVB (290 - 320 nm) and UVC (100 – 280nm). The shortest UV wavelength spectral region, UVC, is negligible at the surface of the earth as it is mostly absorbed by the ozone in stratosphere. Therefore, the UV radiation reaching the surface of the earth is mainly composed of UVA, with a relatively small but non-negligible amount of UVB.

As sunlight passes through the atmosphere, all UVC and about 90% of UVB is absorbed by ozone, water vapour, oxygen and carbon dioxide. UVA is not filtered as significantly by the atmosphere. Therefore, the UV radiation reaching the Earth's surface is largely composed of UVA with a small amount of UVB component.

UV Radiation levels are influenced by:

UV radiation levels are highest under cloudless skies. However, light or thin clouds have little effect in reducing exposure and may even enhance UV levels because of scattering.

Ozone in the stratosphere absorbs some of the UV radiation that would otherwise reach the Earth's surface. Ozone levels vary over the year and even across the day.

UV radiation is reflected or scattered to varying extents by different surfaces, e.g. fresh snow can reflect as much as 80% of UV radiation, dry beach sand about 15% and sea foam about 25%. 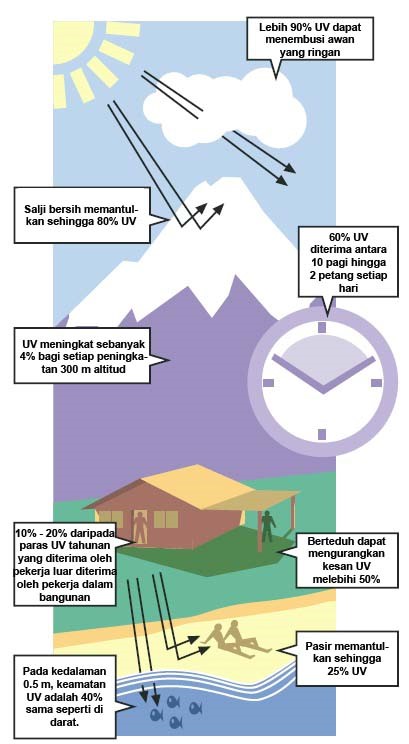 Why is UV radiation harmful?

Small amounts of UV are beneficial for people and essential in the production of vitamin D. UV radiation is also used to treat several diseases including rickets, psoriasis, eczema and jaundice. This takes place under medical supervision and the benefits of treatment versus the risks of UV radiation exposure are a matter of clinical judgement.

Annually, some 12 to 15 million people suffer blindness from cataracts worldwide. According to WHO estimates, up to 20% of these cases may be caused or enhanced by sun exposure, especially in countries close to the equator. UV radiation may also suppress the immune system, thereby enhance the risk of infectious disease and limit the efficacy of vaccinations.

People's behaviour in the sun is considered to be a major cause for the rise in skin cancer rates in recent decades. An increase in popular outdoor activities and a change in sunbathing habits often result in excessive exposure to UV radiation. Many people still perceive suntan as a symbol of attractiveness and good health.

It is a popular misconception that only fair-skinned people need to be concerned about overexposure to the sun. Darker skin has more protective melanin pigment, and the incidence of skin cancer is lower in dark-skinned people. Nevertheless, skin cancers do occur with this group and unfortunately they are often detected at a later, more dangerous stage. The risk of UV radiation-related health effects on the eye and immune system is independent of skin type.

What is the solar UV Index?

The Solar UV Index (UVI) describes the level of solar UV radiation at the Earth surface. The values of the index range from zero upward - the higher the index value, the greater the potential for damage to the skin and eye, and the less time it takes for harm to occur.

The UVI vary throughout the day. In reporting the UVI, most emphasis is placed on the maximum UV radiation level on a given day. For MetMalaysia, the UVI is reported hourly from 11.00 am to 4.00 pm.

Why do we need the UVI?

The UVI is an important method to raise public awareness of the risks of excessive exposure to UV radiation, and to alert people about the need to adopt protective measures. Encouraging people to reduce their exposure to the sun can decrease harmful effects and significantly reduce health care costs. The UVI is especially aimed at vulnerable and highly-exposed groups such as children and tourists.

How UVI are reported?

The UVI values are grouped into exposure categories:

Cloudy weather doesn't mean you can't get burnt. UV radiation can penetrate through cloud. It's the UV radiation in the sun's rays that burns you and causes skin cancer. UV radiation is not seen or felt, and does not depend on the temperature level. That's why the damage to your skin and eyes can occur in hot or mild temperatures.

Shade, clothing and hats provide the best protection - apply sunscreen to parts of the body that remain exposed, like the face and hands. Sunscreen should never be used to prolong the duration of sun exposure.