The ozone layer is concentrated within the stratosphere, between 20 to 40 kilometres from the surface of the Earth. Ozone can be produced by numerous chemical reactions, but the main mechanism in the atmosphere for its production and removal is absorption of ultra-violet (UV) radiant energy from the sun.

Ozone is produced when O2 absorbs UV radiation at wavelengths of less than 242 nanometres, and is removed by photo-dissociation from sunlight for wavelengths greater than 290nm. O3 is also the major absorber of UV sunlight between 200 and 330nm. The combination of these processes is effective in maintaining a relatively constant amount of ozone in the layer, and in absorbing 90% of UV sunlight.

Its primal function is to filter harmful ultraviolet (UV) radiation travelling from the sun to the surface of the Earth.  The UV radiation if unfiltered can penetrate the protective coverings of flora and fauna, thereby causing severe damage genetically. This results in higher susceptibility towards pests and diseases for agricultural and forest ecosystems. Increased UV radiation in aquatic systems affect the nutrient mixing and thereby the aquatic life sustaining photosynthesis process.

The maintenance of enough stratospheric ozone to absorb harmful UV sunlight is therefore vitally important to all life forms on earth.

Stratospheric ozone is mainly produced in the tropics and transported to higher latitudes by large-scale atmospheric circulation during the winter to spring months. The tropics generally possess lower ozone.

A known threat to this ozone balance is the introduction of man-made chlorofluorocarbons (CFCs) which increase the rate of ozone removal, resulting in a gradual decline in the global ozone levels.

CFCs are used by modern society in a myriad of ways, in refrigerants, as propellants in spray cans, in foam manufacture and in solvents, particularly for the electronics industry.

The long lifetimes of CFCs means that a single molecule released today can exist 50 to 100 years in the atmosphere before it is eliminated. Over periods of approximately five years, CFCs move slowly up into the stratosphere (10-50 km). Above the main body of the ozone layer, centred in the height range 20 to 25 km, less UV is absorbed by ozone. The CFC molecules break down after reaction with UV, and release free chlorine atoms. These chlorine atoms are then able to destroy ozone.

The Antarctic ozone 'hole' is caused by a springtime thinning of the ozone layer between particular altitudes over Antarctica. Such thinning has been detected each year for the past decade. Formation of the 'hole' occurs each September and recovery to 'normal' conditions occurs in late spring or early summer.

There appear to be two major reasons for the ‘hole’ the worldwide observed increases of CFCs detected throughout the atmosphere, and the unique wintertime meteorological environment over Antarctica. Between particular altitudes above Antarctica, the very cold stratospheric temperatures allow ice crystals clouds to form.

In these clouds, chlorine molecules from CFCs are chemically released during the darkness of the polar winter. The resultant build-up of chlorine molecules is reduced to ozone-destroying chlorine atoms by the action of UV when sunlight begins in September over Antarctica. 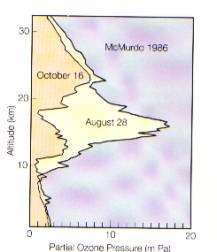 Ground-based and satellite measurements show significant decreases of total column ozone in winter and summer for both northern and southern hemispheres at middle and high latitudes. These downward trends were larger during the 1980s than in the 1970s. No statistically significant trends have been determined for the tropics during the 1980s. The most advanced computer models of global chemical destruction of stratospheric ozone explain most of the observed trend of total ozone in middle latitudes in summer, but only about half of that in winter. This means that future global ozone changes cannot be satisfactorily predicted as yet.

Total ozone measurements are conducted using three different platforms. These platforms include a surface based solar spectrophotometer, ozonesondes which reach stratospheric levels and near earth orbit satellite based sensors. 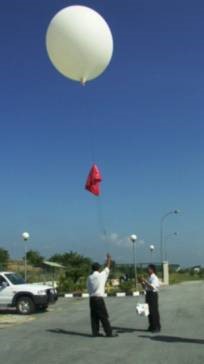 Action at the international level

In 1975, following concern that human activities may threaten the ozone layer, the WMO, at the request of the United Nations Environment Programme (UNEP) initiated the Global Ozone Research and Monitoring Project to coordinate the long-term monitoring and research of ozone.

All data from monitoring sites all over the world are transmitted to the World Ozone Data Centre in Toronto, Canada, where they are available to the international scientific community.

The Protocol introduced a series of measures, including a timetable for action, to regulate the production and release of CFCs into the environment. It called for the levels of consumption and production of certain CFCs to return to 1986 levels by 1989, and a further 50% reduction by 1999. These measures are subject to further review. 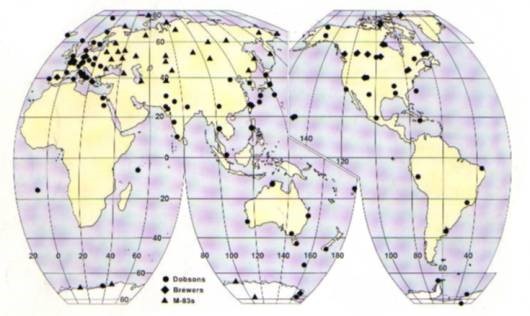